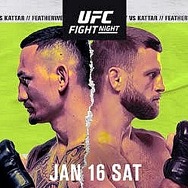 UFC will air live on ABC linear TV for the first time in history this Saturday, January 16. UFC FIGHT NIGHT: HOLLOWAY vs. KATTAR will air on ABC, live from UFC FIGHT ISLAND on Yas Island, Abu Dhabi in the United Arab Emirates. The main card will simulcast on ABC as well as ESPN+ beginning at 3 p.m. ET. Coverage begins on ABC at 2 p.m. ET with the debut of UFC 257 Countdown: … END_OF_DOCUMENT_TOKEN_TO_BE_REPLACED