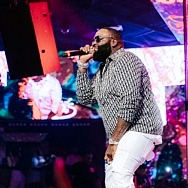 Celebrate the New Year with a Drai’s LIVE Performance by Rozay and a Grand View of the Las Vegas Strip’s Fireworks Display The world-renowned rooftop nightclub and epicenter of Las Vegas nightlife and entertainment, Drai’s Nightclub has announced that hip-hop icon Rick Ross will return for the third performance of his new multi-year Drai’s LIVE residency on New Year’s Eve, … END_OF_DOCUMENT_TOKEN_TO_BE_REPLACED