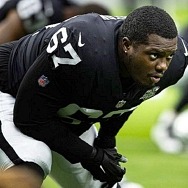 The Las Vegas Raiders have signed free agent G Lester Cotton Sr., the club announced Tuesday. Cotton Sr., a 6-foot-4, 335-pound guard, was originally signed by the Raiders as an undrafted free agent following the 2019 NFL Draft. During his rookie campaign, Cotton Sr. spent 13 games on the team’s practice squad while appearing in one contest. He spent the 2020 offseason with … END_OF_DOCUMENT_TOKEN_TO_BE_REPLACED