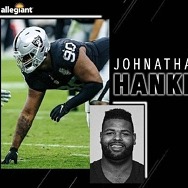 The Las Vegas Raiders have re-signed DT Johnathan Hankins, the club announced Saturday. Hankins, a 6-foot-3, 340-pound defensive tackle, originally joined the Silver and Black in 2018 after a one-year stint the Indianapolis Colts (2017), having spent the previous four years (2013-16) with the New York Giants after being selected by the team in the second round (49th … END_OF_DOCUMENT_TOKEN_TO_BE_REPLACED