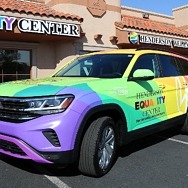 Over the weekend, Henderson Equality Center, was surprised by Findlay Volkswagen, Melisa Eichbauer, General Manager and staff, with a rainbow wrapped Atlas SUV.  This surprise came just in time too, with Las Vegas Pride hosting their annual Pride Parade, this rainbow wrapped SUV will be making its debut in the parade.   Mr. Davin, the Executive Director said … END_OF_DOCUMENT_TOKEN_TO_BE_REPLACED