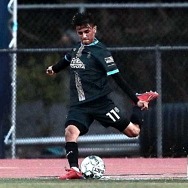 The Lights come back to where their season kicked off last month to take on Los Angeles Galaxy II in Carson, California. The game started quickly with an early goal by Galaxy II before Lights' forward, Alvaro Quezada, scored an equalizer, and Henderson, Nevada's own, Danny Musovski, scored a go-ahead goal. But, just before half LA scored a goal to cause the game to go into … END_OF_DOCUMENT_TOKEN_TO_BE_REPLACED