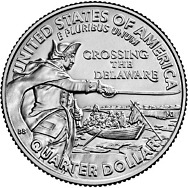 On December 25 in 1776, General George Washington, along with 2,400 troops and artillery, began his historic crossing of the Delaware River in preparation for a surprise attack on British and Hessian soldiers during the American Revolutionary War. Today, the United States Mint (Mint) is unveiling a new design depicting this pivotal moment in history which will be displayed … END_OF_DOCUMENT_TOKEN_TO_BE_REPLACED