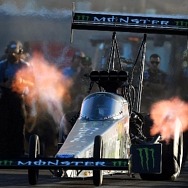 Drag racing’s ultimate thrill ride returns to the entertainment capital of the world, as the NHRA Four-Wide Nationals are set to take place April 1-3 at The Strip at Las Vegas Motor Speedway.  The incredible thrill of four 11,000-horsepower nitro-burning machines powering down the dragstrip simultaneously is a thrill unlike anything in motorsports and it only takes … END_OF_DOCUMENT_TOKEN_TO_BE_REPLACED

The Strip at Las Vegas Motor Speedway is scheduled to host two NHRA Camping World Drag Racing Series events in 2022, the National Hot Rod Association announced Wednesday. The NHRA Four-Wide Nationals is slated for April 1-3, and the Dodge//SRT NHRA Nationals presented by Pennzoil — part of the NHRA Countdown to the Championship — is planned for Oct. … END_OF_DOCUMENT_TOKEN_TO_BE_REPLACED