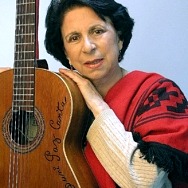 The Music of Henderson Songwriter Suni Paz Will Be Included in a March 4 Online Presentation Offered by the National Endowment for the Arts (NEA), Featuring the Agency’s National Heritage Fellows. Paz, one of the first artists to bring the nueva canción tradition of music to North American audiences, was named a National Heritage Fellow in 2020. Her music will be featured in … END_OF_DOCUMENT_TOKEN_TO_BE_REPLACED