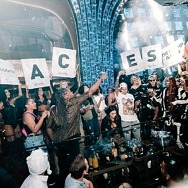 Last night, Monday, September 19, the Las Vegas Aces partied at JEWEL Nightclub inside ARIA Resort & Casino to celebrate the team’s first-ever WNBA championship. As they arrived, fans were lined up outside the club to cheer them on. Players from the team posed for a photo in front of JEWEL’s LED stairs which displayed multiple images of the team’s championship … END_OF_DOCUMENT_TOKEN_TO_BE_REPLACED