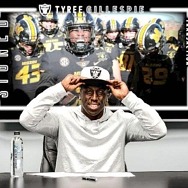 The Las Vegas Raiders have signed fourth-round draft pick S Tyree Gillespie, the club announced Monday. Gillespie was selected with the 143rd overall pick by the Raiders in the 2021 NFL Draft. The 6-foot, 207-pound safety played in 41 games during four seasons at Missouri. Over his career, Gillespie recorded 146 tackles (107 solo), including 6.5 for loss, two sacks, 12 … END_OF_DOCUMENT_TOKEN_TO_BE_REPLACED