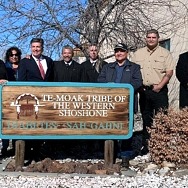 The Te-Moak Tribe of Western Shoshone Indians of Nevada  announced the formal establishment of its Tribal Court consistent with its Constitution and with the Tribe's sovereignty.  The investiture of the judges, prosecuting attorney, court clerk and bailiff were conducted on Saturday, February 6, 2021, at the Tribe's facility.  Consisting of four Bands: Battle … END_OF_DOCUMENT_TOKEN_TO_BE_REPLACED